The first few chapters of Genesis have flown by, but they are incredibly important to the rest of the story. Like the opening credits to the famed Star Wars movies, they set the stage for the action to follow.

Thus far, what have we learned?

First, we’ve discovered that the world is here by God’s loving design. It is not the result of a war between the gods (as per ancient Babylonian and Egyptian stories), nor is it merely an accident of nature (as per contemporary scientific theories).

The implications of this are enormous, for if true, it shows that the human quest for meaning and morality is not merely a matter of personal taste. Instead, it is a reflection of the God who made us. If it’s not true and we are here only by accident -- well, life is essentially meaningless and morality is whatever we decide it to be. Kind of like contemporary culture, don’t you think?

Next, we’ve found out that the root of this world’s problems are found in the human desire to live a life independent of the God who first breathed life into us. We’ve already seen this demonstrated in the lives of Adam and Eve, Cain and Abel, Lamech and his children; now we see it in the escapades of Noah and his descendants. Things reach their nadir with the construction of the Tower of Babel, as humans seek to unite as one “to make a name for [themselves].” It’s time, once again, for God to step into the story.

So, having seen both Adam and Noah fail to cultivate the beautiful, life affirming world God intended, God reveals himself to a pagan named Abram: “Go from your country and your kindred and your father’s house” (thus leaving his entire cultural, religious, and family identity behind him) “to the land that I will show you. And I will make of you a great nation… and in you all the families of the earth shall be blessed.”

“So Abram went,” the Bible says, and thus the long rescue story of Scripture began. Abram’s journey was not without its mistakes, as you will see, but despite this, God continued to affirm his promise to him. Why? Because Abram was perfect? No. Rather, because God was faithful. And Abram, notwithstanding his poor choices along the way, continued to trust in God’s faithfulness.

The long trajectory of Abram’s story ultimately led to the dusty desert outside Canaan — later called Israel, and a thousand years later, Judea. In this desolate place another man began his own incredible journey of faith. He’d just spent forty days fasting in the desert, seeking God’s guidance for his future. He was famished. 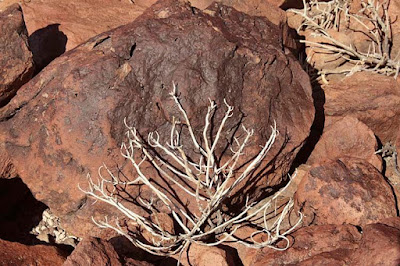 At his moment of weakness, a stranger appeared. The stranger recognized his hunger, and challenged him in the same way he had challenged an innocent woman at the dawn of Earth’s history. She had been tempted to take a fruit; he was tempted to make some bread. Her name was Eve; his name was Jesus. She, seeing and desiring the fruit, took it. His desire was no less than hers. But instead, he said, “It is written, ‘Man shall not live by bread alone, but by every word that comes from the mouth of God.’”

Welcome to the Daily Bread Project. Today is Ash Wednesday, the day when, traditionally, Christians begin a season of fasting and remembrance. It’s a worthy discipline, one I’ve practiced many years.

But in our case, Lent is not a season of fasting, but rather, of feasting. We are feasting on the Word of God. We are filling our souls with Daily Bread. God grant that, in our own seasons of trial, we will not rely on human wisdom as Eve did, but we will be able to say, along with Jesus, “It is written.”
Email Post