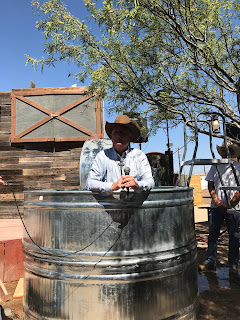 The irony is this: John the Baptist called the people to “Prepare the way for the Lord,” but he was totally unprepared himself when Jesus showed up.

“I should be baptized by you,” John said, “not you by me!” He only consented when Jesus insisted that it was the right thing to do.

John could not have known this at the time. Indeed, much about Jesus’ Advent was only cryptically revealed in the Hebrew Scriptures. It took his death and resurrection to convince people that Jesus was, in fact, God’s Anointed Deliverer.

In the meantime, like most everyone else, John found Jesus’ ministry surprising and confusing. To his credit, however, he was willing to do what Jesus said despite his questions. He baptized Jesus and thus fulfilled God’s plan for his life.

As we prepare for Christmas, we can learn a lot from John.

After all, for most of us, the holidays bring both blessings and burdens. We welcome its blessings, but the burdens are hard to bear: someone we love is missing at the table; something in life is not making sense; somewhere around us a heart is breaking.

We question Jesus’ wisdom. Why does he ask us to do what we don’t want to do? To accept what we don’t understand? To let go when we want to hold on?

In these moments, we do well to follow John’s example.

John did not know what Jesus was up to, or why he should do what Jesus asked him to do. But he did know this:  Jesus was God’s promised Messiah, and that was enough for him. He chose to trust Jesus even when he didn’t understand him. May God help us to do the same.
Email Post