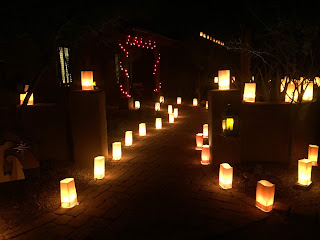 Ouch! My back hurts. I just finished installing 220 luminarias on our roof and around the perimeter our home. It’s been a family Christmas tradition since 1991.

It began as a tribute to childhood memories of placing luminarias around my uncle’s house in Moon Valley every Christmas Eve. Besides, I thought luminarias were more beautiful and serene than the garish flashing lights I saw elsewhere. I still think so.

We began with twenty bags placed on either side of our driveway. Every year afterward we added ten bags, extending our collection until today, when it virtually covers our home.

A neighbor walked by while I was on the roof, saying, “It always feels like Christmas is here when I see the luminarias on your house.”

I feel the same way, although sometimes I wonder if it is worth it. After all, my back is really sore! But I know that time spent in preparation for Christmas enhances the joy of its celebration.

You probably have similar holiday traditions. As I write this, for example, Donna is preparing hundreds of homemade chocolate treats to share with our church family, our neighbors and friends. (They’re yummy, by the way – and if you come to our Chili Supper this Sunday afternoon, you can find out for yourself.) It’s a lot of work for her, but it just wouldn’t feel like Christmas without it.

Yes, most of us have traditions which enhance the holiday season. We may find them tedious, but we know that without them, our Christmas would be poorer. A proper celebration requires significant preparation.

Physical preparation for Christmas is important, but so too is spiritual preparation. I can’t help but wonder: How seriously do we prepare spiritually for the Christmas holiday? No doubt, attending a Christmas Eve service, and worshiping each Sunday during the holiday season is important. But is this enough?

Advent, which begins on the fourth Sunday preceding Christmas, is the traditional time of spiritual preparation for this special holiday. Its history and importance far exceeds the current cultural mayhem of Black Friday and Cyber Monday. After all, Christians have been observing Advent for fifteen hundred years. 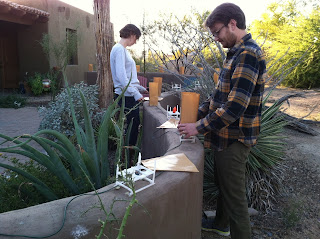 As this Advent season begins then, let me encourage you to carve out time in your daily schedule to ponder the meaning of Jesus’ arrival – Jesus’ Advent – in human history. Take time each day to (borrowing the words of John the Baptist) "Prepare the way for the Lord."

For example, tradition suggests that luminarias began as a means of lighting up the churches of New Mexico in order to welcome the Christ Child into the world. They were also used to guide worshipers to midnight mass. In both cases, the critical image is one of light.

Consider for a moment the spiritual significance of light in the Christmas story. To discouraged and displaced Israelites, the prophet Isaiah predicted that someday light would pierce the darkness of their desperate situation: “The people who walked in darkness have seen a great light…. For unto us a child is born.”

And John’s Gospel, though silent about the nativity of Jesus, says volumes about the meaning of his birth: “The true light, which gives light to everyone, was coming into the world.” His life, John says, “was the light of men.”

As you prepare for Advent, thank God that his promise to bring light found its fulfillment in the most unlikely of circumstances: when a displaced family cradled an infant child in a manger outside Bethlehem.

The light first shone to shepherds on a hillside. It reached out to pagan astrologers from far away. But the true light wasn’t a star, nor was it a chorus of angels: it was a Baby. This Baby was, as John said, "the true light, which gives light to everyone.”

When this Baby grew up, he said, “I am the Light of the World. Whoever follows me will not walk in darkness, but will have the light of life.”

The Light brought sight to the blind, wholeness to the deranged, welcome to the estranged, and forgiveness to the fallen. It sliced through the darkness of human arrogance and pride, and made room at the table for all who would come.

But there was a day when the pride of religious and political power had its say. The light went out on a hill outside Jerusalem, and when it did the whole earth went black. Darkness had its day, and the world wept.

That was on Friday -- the true Black Friday. But death would not have the last word, for "Love is strong as death" and "many waters cannot quench love." Darkness was swallowed up by light, and on Easter morn, new life emerged from the grave. “The Light of Life” conquered darkness, death was drowned, and the world has never been the same since.

With that in mind then, whenever you see the lights of the season this Christmas, sing a song of thanksgiving for the light. Any song will do, but I'm kind of partial to this one: