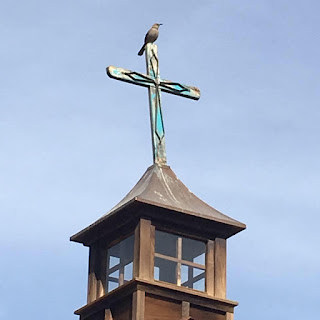 What sort of body did Jesus have when he was raised from the dead?

It is a mystery to us, of course. But Luke gives us some important clues in the closing scene of his gospel: We discover that the resurrected Jesus had a real body, but altered from its former reality.

Jesus’ new body bore the marks of his old body. It was made of flesh and bones. He said, “See my hands and my feet, that it is I myself. Touch me, and see. For a spirit does not have flesh and bones as you see that I have” (39). Jesus wanted them to know that he was not merely a spirit, an apparition, a ghost, or a figment of their imagination. He still had the marks of his pre-resurrection body.

Jesus was also capable of eating and drinking. Later he says, “Have you anything here to eat?” I have to think Jesus smiled a bit when he asked them this question. But the Bible tells us, “They gave him a piece of broiled fish, and he took it and ate before them.”

Jesus was able to appear and disappear at will. What are we to make of this? Are we to assume that he left his body when he left their presence? Certainly not. He continues to inhabit his resurrected body – but now his body is comfortable in the heavenly as well as the earthly dimension. In Jesus’ new body, the gap between heaven and earth was bridged. He is at home in both dimensions of God’s world – the heavenly and the earthly.

In light of the Lord’s Prayer, this is an extremely important point. Jesus prayed, “Thy will be done on earth as in heaven.” Jesus’ resurrection was the first installment in the answer to that prayer. (The final installment is at the end of Revelation, when heaven and earth are reunited.)

These are mind-stretching truths, but of great significance to our faith. For just as Jesus’ resurrection did not release him from his body, but rather transformed it, we who have placed our faith in Jesus can look forward to having our bodies transformed into bodies just like his. “The Lord Jesus Christ, … will transform our lowly body to be like his glorious body” (Philippians 3:20-21).
Our bodies, prone as they are to sin (gluttony, lust, violence, anger, etc.) often feel like impediments to our spiritual lives. Wouldn't we be better without them? Absolutely not. God wants to renew our bodies as well as our souls. This will not be complete until Jesus returns, but in the meantime we are learning how to "present our bodies" to God so that, rather than being "conformed to this world," they can be "transformed by the renewing of [our] minds" (Romans 12:1-2).
It is in light of these glorious truths, Jesus gave the disciples and their descendants (that’s us) the task of proclaiming the good news about Jesus and his resurrection to the whole world. For when Jesus rose from the dead, New Creation was birthed out of the old. New life came out of the tomb that day — like the butterflies emerging from a cocoon. Not only do we get to share in that life ourselves, but we get to share that life with the whole world. Happy Day!
Email Post